Share this post
Mangaluru, June 17: All arrangements including separate rooms for those students with Influenza-like symptoms have been made by the district administration for the II PUC examination scheduled on Thursday.
According to officials out of the 33264 students who had to write an exam in March, 6322 students will take the exam in other districts. Thus 26942 students will attend the exam in DK district on Thursday.
A nodal officer has been appointed in every college to help the students.
Deputy Commissioner has already issued prohibitory orders in 200m around the centers.  The photocopy (Xerox) shops near the centers have been shut. Steps are taken to provide security, and transportation.
Thermal scanners and sanitizers are provided to every center based on the number of students. Necessary steps have been taken to ensure social distancing during the entry and exit of the students.
DK makes arrangements for PU exam on June 18
District Health Officer said that a separate hall has been arranged in every center for those students with Influenza-Like symptoms (Cold and Fever). Health department officials would be present at every center for any help.
Buses for students:
For those students coming from Kerala, free buses have been arranged from the border. A nodal officer has been appointed for every bus. Students should be present at the Kerala border at 7 am with hall ticket and ID cards. They are allowed to bring a water bottle, snacks, and lunch.
KSRTC buses are arranged for students who wanted bus services in taluk and rural areas.
Deputy Director of Pre University (DDPU) has asked the parents to contact the helpline number 0824-2453787 for any queries.
The examination will be held in 51 centers in the district. Of this, there are 24 examination centers in Mangalore, 4 in Moodubidre taluk, 7 in Bantwal taluk, 9 in Puttur taluk, 4 in Belthangady taluk, and 3 in examination centers in Sullia taluk. 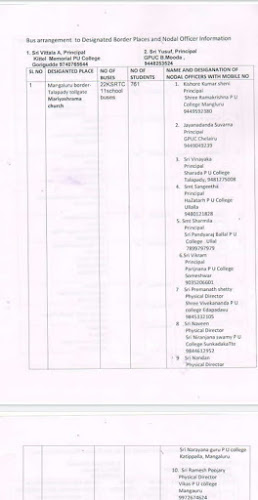 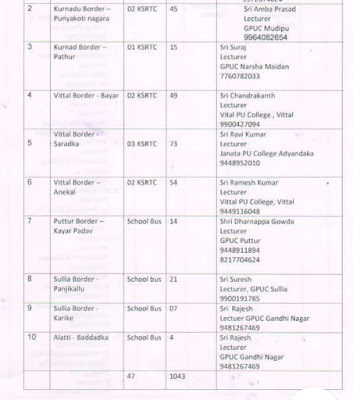