Mangaluru: The Dakshina Kannada district administration is geared up for Lockdown 3.0 with some relaxation mentioned by the Union government.

The district administration has chalked out a plan to implement the guidelines issued by Central and State governments also ensuring that people do not face any problem and prevent the spread of COVID-19.

Dakshina Kannada district has nine active COVID cases and eight containment zones.
The Deputy Commissioner stated that there will be no public transport- train, plane, and Bus service during Lockdown 3.0. Educational institutions, coaching classes will be closed. But the online/distance learning service would be allowed.

Cinema halls, gymnasiums, stadium, swimming pools, parks, and other such places were people gather in large numbers will be shut. No political, religious, educational, and cultural events would not be allowed.

Saloon, beauty parlor, and cloth stores, textiles will not be open. Also, public movement is banned between 7 pm and 7 am.

Hospitals, clinics, shops will be open. Private vehicle movement will be allowed however with restrictions. Only three people including the driver will be allowed in four-wheeler and two-wheelers would be allowed without pillion rider.

Industries can operate with necessary precautionary measures. Private offices will be open with 33 percent of employees.

The district administration has asked people above 65 years, below 10 years, pregnant and those with a health problem, not to venture out except in emergency cases.

Mask or cloths covering face and nose is made compulsory when people come out of the house. People should also maintain social distancing 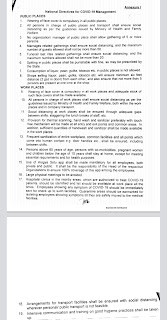 The district administration has also made it clear that there will not be any relaxation in the eight containment zones. The needed supplies would be provided by the Incident Commanders of those containment zones.