New Delhi, Dec 09, 2022: Usually, anonymous use of platforms is seen as protecting privacy of users. However, to ensure accountability, the Information Technology (Intermediary Guidelines and Digital Media Ethics Code) Rules, 2021 (“IT Rules”) cast prescribed obligations on intermediaries including for significant social media intermediaries to observe due diligence, and failing to observe such due diligence, they shall no longer be exempt from their liability under law for third-party information or data or communication link hosted by them.

The policies of the Government are aimed at ensuring an Open, Safe and Trusted and Accountable Internet for its users. With the expansion of the Internet and more and more Indians coming online, users are increasingly exposed to potential harm arising from improper use of cyberspace.

With regard to due verification of social media accounts and the terms of use for any paid services offered by them, it is informed that the due diligence requirements for a social media intermediary under the IT Rules include, in the interest of transparency, prominently publishing on its website and/or mobile app and informing users of its user agreement in English or any language specified in the Eighth Schedule to the Constitution, in the language of the user’s choice.

Further, in respect of a social media intermediary which has more than 50 lakh registered users in India, such requirements also include enabling its users to voluntarily verify their accounts and provide such accounts with visible marks of verification.

With regard to steps to address the potential damage due to fake accounts, it is informed that section 66D of the IT Act penalises cheating by impersonating by means of any communication device or computer resource and the same is punishable with imprisonment of up to three years and fine of up to one lakh rupees. As the offence is a cognizable offence, State police departments take preventive and penal action as per law in respect of the same.

To help achieve the aim of ensuring an Open, Safe and Trusted and Accountable Internet by addressing the risk posed by fake accounts, the due diligence required of an intermediary under the IT Rules also includes the following:

(i)      To make reasonable efforts to cause the users not to host, display, upload, modify, publish, transmit, store, update or share, among others, information which deceives or misleads the addressee about the origin of the message or knowingly and intentionally communicates any misinformation or information which is patently false and untrue or misleading in nature, or impersonates another person;

(ii)     In the event of violation of the above, to not host, store or publish, voluntarily or upon actual knowledge on receipt of a grievance or court order or notice from the appropriate government or its agency, unlawful information prohibited under law in relation to defamation, the interest of public order, decency or morality, or incitement to an offence relating to these;

(iii)    To provide, upon receipt of an order from a lawfully authorised government agency, information or assistance for prevention, detection, investigation or prosecution under law; and

(iv)    To have in place a grievance redressal machinery and resolve complaints of violation of the rules within 72 hours of being reported.

This information was given by the Minister of State for Electronics and Information Technology, Shri Rajeev Chandrasekhar in a written reply to a question in Rajya Sabha today. 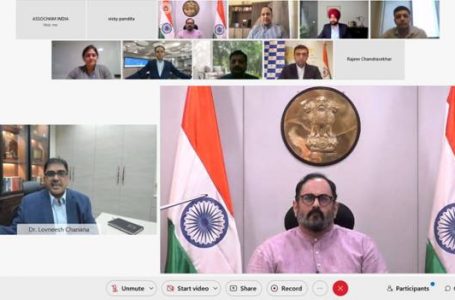 Artificial Intelligence is a Kinetic enabler for...