Mangaluru, Aug 16, 2021: Dakshina Kannada District administration has decided to continue the restriction it had imposed on the entry to the three famous temples in Dakshina Kannada. But devotees have raised doubt over the success of this restriction.

Following an increase in positivity rate, the DK administration has imposed several restrictions. One among them was on the temples that attract a huge crowd from other districts.

Dakshina Kannada DC had ordered to stop providing Seva, anna daana, tirtha, and Prasada at Kukke, Dharmasthala, and Kateel temples. On Weekends even Darshan is not allowed. To stay in the guest houses, devotees need to present an RT-PCR negative certificate. The order was in effect till August 16 and now the DC has decided to renew it till this month-end.

But devotees have raised doubt over this decision.

“There are several questions. The first one is why restrictions on only three temples. Devotees come from other districts to many temples in the Coastal Karnataka and not just Kukke, Dharmasthala, and Kateel. They still continue to come. Sevas may not be allowed but devotees come to these temples from outside. So how does it help?” Hari Bhat, a devotee questioned.

A shop owner in Dharmasthala had similar doubts.

“The district administration has made RT-PCR negative mandatory for those who want to stay in the guesthouses at these three places and on weekends rooms cannot be rented. The temples are strictly following it. But the interesting fact is that the lodges and rooms in nearby places are full now. The tariff of those places has suddenly increased from ₹800 to ₹2,000 now,” he said.

“As there is a ban, people now go to the nearby saloon to tonsure their heads. There is a queue in front of some saloons and they have started the token system. During weekend lockdown people come to Dharmasthala from other places. Last week we had seen people sleeping outside the shops and roadside as they did not get rooms,” he added.

Devotees opine that instead of imposing such restrictions, the government can take practical measures in the temples.

“Let the administration make social distancing mandatory and see it is implemented in these temples. If they do not have enough staff they can use CCTV cameras in these 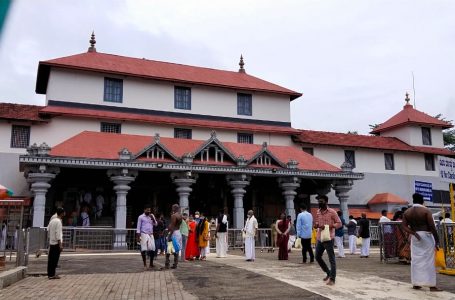