Last Friday, the state government has issued a set of directives which included a ban on the installation of Ganesha idols in public places, procession, and immersion.

The fresh directive issued on August 17 allows the installation of Ganesha idols in public places but after obtaining permission from the local authorities. However, the ban on the procession continues.

The directive states that the idol to be placed in public places should not more than 4 feet high.

The Committees/ Mandalis organizing the traditional Ganeshotsava should obtain permissions from the Municipal Corporation, Local administration. The government has decided to encourage only one Sarvajanika Ganeshotsava per ward/ village.

The government has stated that not more than 20 people should gather at a time and no cultural, entertainment program, dance, and music events would be allowed.

While the devotees are asked to immerse the idols at their home, those in public places have to be immersed in the artificial, mobile tankers set up by the administration. 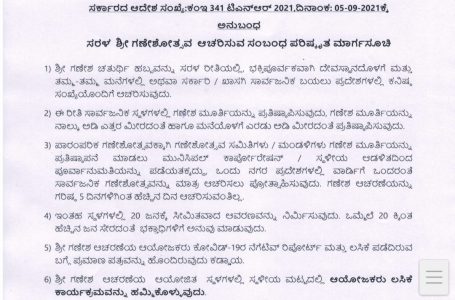