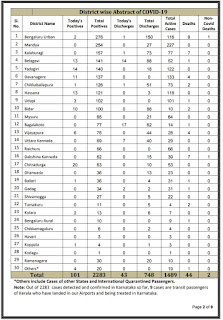 Udupi: The Udupi district administration has declared the area near the houses of two COVID patients (P-2167 and P-2174) as containment zones. The two patients tested positive on Monday.

The house of P-2167 is situated at Moodabettu village in Kaup Taluk. He tested positive after he had Influenza Like Illness.The area near his house has been declared as a containment zone. The 5 km radius is declared buffer zone.

As many as 60 houses with a population of 275 come under the containment zone.

The other containment zone is the area near the house of P-2174 at Heroor village in Brahmavar Taluk.

Seventy-six houses with a population of 672 are in the containment zone.

Kundapur Assistant Commissioner Raju K has been appointed as the incident commander of both the containment zones.

The evening bulletin saw an increase of only one patient (from Vijayapura). The total number of patients tested positive on Tuesday is 101.

Meanwhile the three who had come from Qatar mentioned in the list as people from Dakshina Kannada have been named in the ‘others,’column in the district-wise abstract. They had landed in Bengaluru and are under treatment at the designation hospital there.

A person from Bagalakote who too had come from Quatar and tested positive has been mentioned in ‘others,’ column.