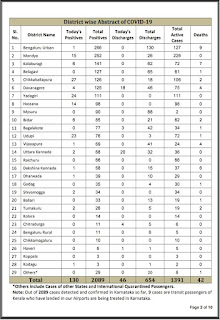 Udupi: Three policemen from three different police stations and a pregnant woman are among the 23 tested positive in Udupi district on Sunday.

The total number of positive cases in Udupi district has increased to 76. Of these 72 are active and are under treatment in COVID hospital.

On May 21, Udupi had recorded 28 positive cases.

Of the 23, three patients are the contacts of Containment zones, and the source of two patients is yet to be ascertained.

“We have shifted them to the hospital. The three police stations are closed down As per SOP we have to sanitize and start operation after 48 hours,” he said and added their close contacts will be quarantined.

“A pregnant, who is likely to deliver in 15 days tested positive. But we have no information on the source. We are working on finding it out. Meanwhile all the primary and secondary contacts are being identified and will be quarantined,” he added.

Dakshina Kanada district had recorded one positive case. The patient (P-2023), a 42-year-old Head Constable of Vittal Police station is the secondary contact of P-1233.

Officials said that P-1233 was taken to the police station before the quarantine center on May 15. The virus is likely to have spread then. The police station will be sanitized and be operational after 48 hours.

In Uttara Kannada, two persons who had come from Maharashtra and were in quarantine tested positive on Sunday.