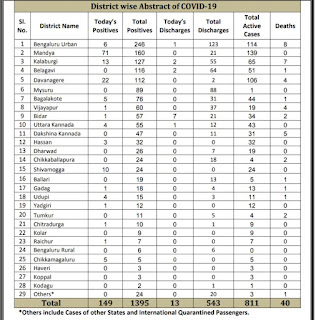 Udupi: Four from the district and a patient who had come from Chitradurga for cancer treatment at Manipal have been tested COVID positive in Udupi district on Tuesday.

Karnataka recorded 149 COVID cases on May 19.

Deputy Commissioner G Jagadeesh said that four had come from Maharastra and were under quarantine.

“A 17 year old girl had come to Manipal from Chitradurga for cancer treatment. She too tested positive. All are shifted to the COVID hospital,” he said.

Of the four positive cases in Uttara Kannada, two were in the quarantine facility.

Meanwhile, a woman who had returned to Joida from Tamil Nadu too tested positive. She had gone home as soon as she arrived from Tamil Nadu. Officials who got to know about this had sent her to a quarantine facility.

Another person is from Dandeli who was working as a driver had traveled to Gujarat. He had returned home without intimating the officials. However, due to the community reporting, the officials were able to track him and quarantine him.

“The area near the house of both the patient will be declared as containment zone. The primary and secondary contacts will be identified,” Uttara Kannada Deputy Commissioner Dr. Harish Kumar K told reporters.

Meanwhile, P-783 from Uttara Kannada was discharged on Tuesday.