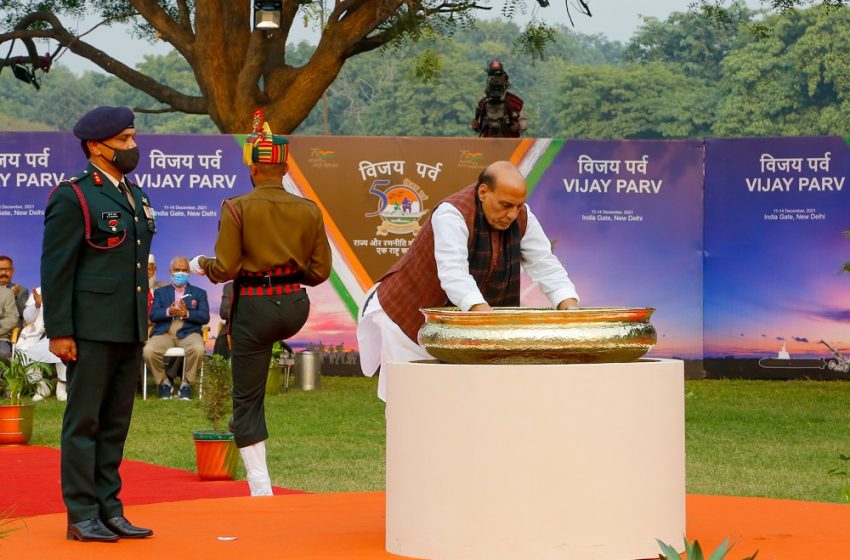 The Union Minister for Defence, Shri Rajnath Singh at the ceremony of mixing of soil collected from locations of major battles fought during the 1971 war, in New Delhi on December 14, 2021.

The gathering comprised of 30 Mukti Jodhas, families of all four Param Vir Chakra and other awardees as well as war veterans. The Mukti Jodhas have been invited to participate in Swarnim Vijay Varsh events to honour the bravehearts who took part in the 1971 war. In his address, Rajnath Singh paid rich tributes to the brave soldiers, sailors and air warriors who ensured the victory in 1971 war by making supreme sacrifice while displaying devotion to duty.

Terming the victory as one of the most important events in world history and a triumph of justice over injustice, Rajnath Singh said, the war fought against the atrocities on common people showed India’s commitment towards humanity. He remembered the heroes of the Indian Army who ensured a historic victory, namely General (later Field Marshal) Sam Manekshaw, Lt Gen Jagjit Singh Aurora (then General Officer Commanding-in-Chief, Eastern Command), Lt Gen JFR Jacob and Air Marshal Idris Hassan Latif and others. “These heroes included Hindus, Muslims, Parsis, Sikhs and one Jew. This is a proof of India’s firm belief towards giving equal respect to all religions,” he said, adding that all these brave soldiers belonged to different states, however, it was the feeling of Indianness which made them as one.

The Raksha Mantri also paid glowing tributes to first President of Bangladesh, Bangabandhu Sheikh Mujibur-Rahman, terming him as the guiding light for the people of his country. He appreciated the fact that Bangladesh has been making giant strides in the path of development since its liberation.

Commending the Armed Forces personnel, including the veterans, for their selfless service, Rajnath Singh described them as the protectors of India’s unity and integrity. “Today our country is moving forward on the path of progress uninterruptedly. This is because of our brave soldiers who are standing firm at the borders. This country sleeps peacefully because our soldiers are awake,” he said.

Stating that no price can be paid for the sacrifices made by the veterans, the Raksha Mantri extended his gratitude and assured of Government’s all possible support to ensure their welfare. “Our every warrior of today is a respected veteran of tomorrow. It is our duty to ensure their well-being. This government understands this very well, which is why, as soon as we came into power in 2014, we fulfilled the long-pending demand of One Rank One Pension,” he added.

Reiterating the Government’s resolve to ensure the welfare and ease of living to the Ex-Servicemen, Rajnath Singh said, many online services have been started under Digital India, including Smart Canteen Cards for shopping, implementation of SPARSH [System for Pension Administration (Raksha)] for automation of sanction and disbursement of defence pension and online access to avail the services of Kendriya Sainik Board and Directorate General of Resettlement. “Our aim is to ensure well-being of our Armed Forces personnel not only during their service, but also after their retirement,” he added.

The Raksha Mantri called upon the people, especially the youth, to follow the gallant footsteps of the veterans and work towards nation building with full capacity, devotion and dedication. “I call upon the citizens to move forward with devotion and dedication and build a New India which is strong and self-reliant. This will be a true tribute to our brave soldiers,” he said. Rajnath Singh also paid tribute to the country’s first Chief of Defence Staff General Bipin Rawat and other Armed Forces personnel who lost their lives in a helicopter crash in Tamil Nadu recently.

On the occasion, the soil collected from different locations of major battles fought during the war was mixed by the Raksha Mantri to commemorate the golden jubilee of 1971 war victory. He described it as a symbol of ‘Unity in Diversity’. The collected soil will be used in the construction of a proposed memorial dedicated to the 1971 war victory.

Rajnath Singh also released a coffee table book titled ‘The 1971 War: An Illustrated History’. The book has been compiled in six chapters and includes some first-hand experiences of the war veterans. The book comprises of tales of valour of four Param Vir Chakra, 76 Maha Vir Chakra and other Gallantry award winners along with anecdotes of war veterans. 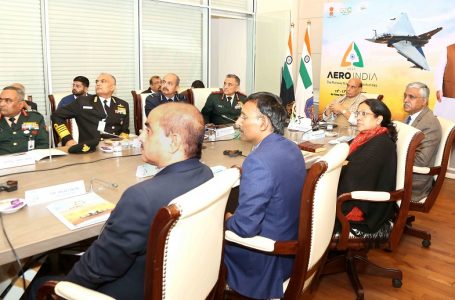 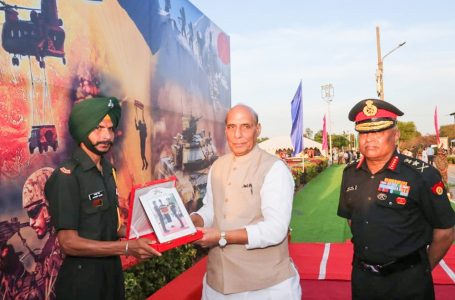