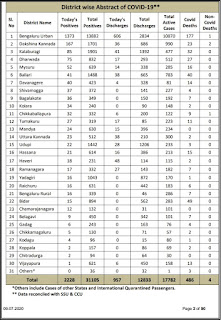 Mangaluru, July 09: Number of positive cases crossed 160-mark for the second consecutive day in Dakshina Kannada with the district witnessing 167 cases on Thursday.
The state recorded 2,228 cases of which 1,373 are from Bengaluru Urban.
Dakshina Kannada: Of the 167 positives today, 64 are primary contacts, 42 with influenza-like illness, and 6 with respiratory infections. One had come from Bengaluru, three from abroad. The pre-surgery samples of 13 tested positives. Meanwhile, the source of 38 is under tracing. The district has recorded a total of 1,709 positives.
A 62-year-old person from Bhatkal who was suffering from respiratory infection died on July 7. A 49-year-old person who had pneumonia and other health issues died on July 8. The samples tested positive.
Uttara Kannada: The district recorded 23 positives. Of these 10 are from Karwar, 5 from Siddapur, two each from Honnavar and Yellapur and one each from Bhatkal, Mundagod, Haliyal, and Sirsi.
The total number of positives in the district is 512 of which 300 are active.
Udupi district: Recorded 22 positive cases today. The total positive in the district is 1,443.
JOIN OUR TELEGRAM GROUP
Tags: COVID NEWS