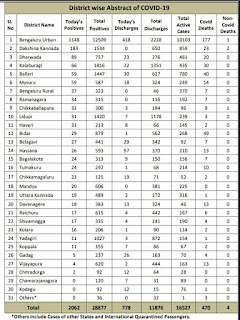 Mangaluru, July 08: Dakshina Kannada district recorded 183 positives and two deaths on Wednesday. This is the highest positive recorded in a day in the district.
Karnataka recorded 2062 positives of which 1148 are from Bengaluru Urban.
Dakshina Kannada: A 57-year-old woman from Mangaluru who had health issues was under treatment at the hospital. She died on July 7 night.A 32-year-old woman from Puttur was under treatment at Wenlock Hospital. She died on July 8 afternoon.
Of the 183 positives, 63 are primary contacts and two secondary contacts. Twenty-five are with influenza-like illness and 4 with a respiratory infection. Five had come from abroad, 2 from other states, and 1 from Bengaluru. Meanwhile, 22 were found positive during random sampling. Five pre-surgery samples tested positive and the source of 54 is under tracing.
Uttara Kannada: 19 tested positive. Of these 13 are from Bhatkal, 3 from Yellapur, two from Haliyal, and one from Karwar.
Udupi: 31 tested positive. The total number of positive in the district is 1421.