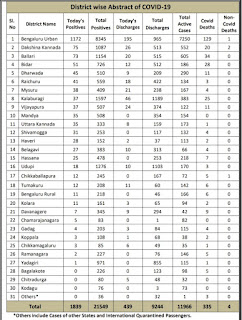 Karnataka recorded 1839 cases. Of this 1172 are from Bengaluru Urban.

The district health bulletin stated that of the 75 patients tested positive today, 11 had come from abroad and 25 are contacts of the patients.Meanwhile, 29 with influenza-like illness, 6 with respiratory infection tested positive.The source of 4 is under tracing.
Uttara Kannada district recorded 35 new cases today including a beat constable of a containment zone.
Of the patients, 3 had returned from Dubai and 15 from other states. One has travel history to Mangaluru and three had been to Udupi. Seven are primary contacts and four with influenza-like illness tested positive.
Udupi district recorded 18 positive cases today. Of these three each had come from Mangaluru and Bengaluru. The remaining 12 are contacts of the patients.
The total number of positive now stands at 1277.
JOIN OUR TELEGRAM GROUP
Tags: COVID NEWS