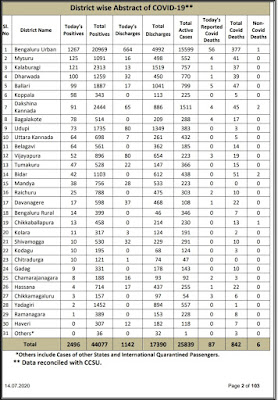 Mangaluru, July 14: After many days, Dakshina Kannada district witnessed cases less than 100. The district recorded 91 cases today.
Karnataka recorded 2,496 cases of which 1,267 are from Bengaluru Urban.
Of these 20 are primary contacts of positives, 29 had influenza-like illness, 5 had a respiratory infection, one had returned from abroad and one tested positive pre surgery. Meanwhile, contacts of 35 are under tracing.
Deaths:
1. 65-year-old woman from Sakaleshpur. Death on July 13.
2. 55-year-old person from Kundapur. Death on July 13.
3. 70-year-old person from Mangaluru. Death on July 14.
Udupi district: The district recorded 72 positives today. Of these 7 had come from Bengaluru, two from Mangaluru. One patient had a respiratory infection and 14 had an influenza-like illness and 48 are primary contacts of positives.
Uttara Kannada: Recorded 62 positive cases today. Of these 26 have been reported from Bhatkal, 23 from Kumta, 6 from Honnavar, 5 from Haliyal, 2 from Mundagod and one each from Ankola, Karwar, and Yellapur.
JOIN OUR TELEGRAM GROUP
Tags: COVID NEWS