Mangaluru: Eight including one from Mangaluru and Bhatkal tested COVID-19 positive in the state according to government’s Tuesday afternoon bulletin. 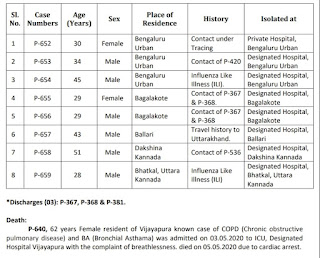 Dakshina Kannada deputy commissioner Sindhu B Rupesh stated that the 51-year-old male (P-658) hails from Boloor in Mangaluru. He is the contact of P-536. His throat swab was collected and sent for testing. The result has tested him COVID-19 positive.

Sources said that P-658 is the son in law of P-536. P-658 along with his wife and son were in quarantine in Wenlock District Hospital. Now he has been shifted to the COVID-19 section.
Boloor is already declared as containment zone after P-658 tested positive. The containment would continue, officials said.

Meanwhile, after a gap of about two weeks, Bhatkal in Uttara Kannada district has recorded a positive case today. All the positive patients of the district were discharged from the hospital.

The 28-year-old male (P-659) is from Bhatkal. He was tested as he had Influenza-Like Illness (ILI). His throat swab was sent for testing and the report has declared him positive.

Three from Bengaluru Urban, two from Bagalkot and one from Bellary are the others tested positive till afternoon.