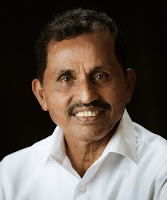 Harikrishna, who hails from Amtadi village in Bantwal is known for his oratory skills. He played a major role in the victory of BJP in Dakshina Kannada district, particularly in Bantwal during the last assembly elections.
Known for his organising skills, Harikrishna is active in various Billava organisations and at Kudroli Sri Gokarnanatha Kshetra.
Harikrishna is also known for his close association with senior Congress leader B Janardhan Poojary.
JOIN OUR TELEGRAM GROUP
Tags: Harishna Bantwal